The Boring Stuff: What is ME/CFS? 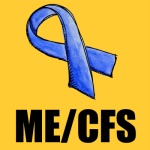 We should probably have this straight before we go any further. What is ME/CFS? It’s a neuroimmune illness that affects pretty much all bodily systems.

So, taking it all together: Brain and spinal cord inflammation with muscle pain. Now, this is an old name, dating back to 1969. Such inflammation is has been found in autopsies of sufferers, but it’s not the cause, which is not yet known.

Now, Chronic Fatigue Syndrome. CFS, simply, is a name made up by a committee at the CDC in the late 80s after a U.S. outbreak. I assure you, I am not making this up.

If you know nothing about ME/CFS, this video by Giles Meehan and friends is a good start:

Is there any treatment? No FDA-approved ones, so most patients struggle to relieve only some of their symptoms at best. Without any real treatment, acting like you have mono and staying in bed is your best chance to get well…as long as you do it right away.

The tiny amount of funding this disease receives is absolutely shocking – only a few dollars per patient per year in the U.S.

One other thing: Do not bother with the Wikipedia entry for CFS. It has historically been an edit war with loggorhhea, mostly being won by those who deny the abundance of scientific evidence accumulated over decades showing abnormalities in the illness and who instead believe CFS is, roughly, malingering. Instead of that, you should read this editorial, “All in the Mind? Why Critics are Wrong to Deny the Existence of CFS.”

The sordid history of CFS and the CDC is reviewed by NYT reporter David Tuller in this article.

The webseries ME/CFS Alert’s in-depth interviews capture many people in the forefront of work on the illness.

The best book for patients is the second edition of Erica Verillo’s CFS: A Treatment Guide.

There’s a gathering of the many medical abnormalities found in ME/CFS in this document.

This entry was posted in Boring, ME/CFS and tagged boring, cdc, history, name. Bookmark the permalink.

24 Responses to The Boring Stuff: What is ME/CFS?