A conversation at our house recently:

“So when you think of things that the illness has cost me, things that were a big part of my identity, things that I loved to do, what’s the first thing that comes to mind?”

“That’s easy: Control. I mean, I don’t mean that in a negative way – you are very detail-oriented, just as much as I have my head in the clouds, and I know it’s been really hard for you not to be able to have your hands in things, because you enjoy managing every aspect of a process and you’re very particular about how things should be done.”

I looked over my glasses at Chimp. “Because I was going to say singing,” I said.

“Oh. That too. Your singing is the one thing that would make me cry.”

“Nice attempt at a save.”

I don’t remember a time when I didn’t sing. I was the character in ABBA’s “Thank You for the Music”: Mother says I was a dancer before I could walk/
She says I began to sing long before I could talk.

Dance lessons I took, but singing I just did, standing on my bed, choreographing show-stopping numbers in which I starred, backed by an imaginary cast of thousands, to my day’s choice of record on my Fisher-Price player. My main aspiration was rock star…possibly actress. I remember watching Aileen Quinn’s performance in Annie in the cinema and thinking, with the egotistic boldness of childhood, “I could do that. I want to do that.”

But of course I was just a kid, and not a pro: In elementary school, I once blanked on a piano piece during a recital, and another year I flubbed a big line in my lead in a church musical because I’d been concentrating so hard on the line before it. The piano debacle reduced me to helpless tears afterwards – I didn’t love piano and my failure was just the cherry on the sundae of my struggle with its endless frustrations – but the line-flubbing I took in stride and just kept on going, because I did love singing and acting.

My mother, in these years, was mostly endlessly patient with me constantly singing along with the radio when we were in the car – including from beginning to end on at least one 500-mile trip to Indiana, as I frequently punched the buttons to find the best selection of the moment. From time to time I did get asked to turn it down because of the occasional “headache,” but not often. My long-suffering mom, by the way, had been in band, and wouldn’t I like to be in band too? No, sorry Mom, nothing duller to my childhood sensibilities than being one of a hundred people behind instruments – more egotistic boldness here – I wanted to be center stage.

I had been in the school choir for four years by the end of 8th grade, but I was still only at best a very average singer. My high school choir director – Bob Stamback – was legendary in our state for a program beyond the average high school level. Usually, at the end of 8th grade, you auditioned and were placed in one of the two main ensembles: the women’s choir or the mixed-voice choir. But the year I was a rising freshman, there was an unusually large number of freshman women, too many to incorporate into the high school ensembles successfully. Because of that, Mr. Stamback announced we were to have a freshman women’s ensemble. And this decision changed my life. 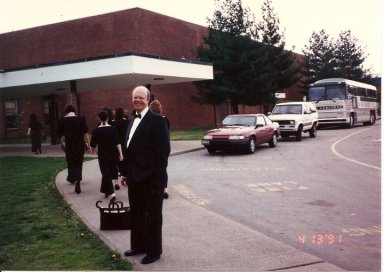 “Uncle Bob” on a choir festival trip to Tennessee.

There were twenty of us. If you’ve never sung in a choir, when there are twenty voices, there’s nowhere to hide. This started out slightly terrifying, as Mr. Stamback was generally good-humored but serious about our work and rather intimidating, despite being affectionately known to the choir kids as both Uncle Bob and Homer Simpson (see the photo at right and tell me you wouldn’t have coined the same nickname). Once I got comfortable with the fact that he was going to call on us individually all the time, I realized that beyond our ensemble work, we were effectively getting a group voice lesson every day. And at the audition at the end of the year, I actually could sing pretty respectably  – and landed a coveted spot in the mixed-voice choir for my sophomore year.

I loved the hour a day I got to spend there, because singing in that group, with the expectations he placed on us, could be massively exhilarating. My favorite piece we did in that chorale was John Rutter’s “Gloria” (a nice rendition of it below) – I remember coming to the end of its 20-minute length in one late rehearsal and sort of “coming to,” realizing my arms were shaking, there was sweat pouring down my back, and I had goosebumps all over – and feeling deliriously happy. There is something very special about that transcendent aspect of singing in a choir, about the end result of putting in the many hours of rehearsal to get each of the hundreds of details of a piece exactly right, and when every bit is perfected, there’s a magic to the unity of the singers’ cooperation that is beyond description. It’s a wonderful thing to feel like you belong in the midst of that and are contributing to it.

Individually, learning to sing from Mr. Stamback is truly one of the greatest gifts I was ever given. Gaining a foothold on that skill boosted my self-confidence, allowed me to begin to match up my abilities to my childhood aspirations and self-concept, and made me feel like I was actually somewhat talented. All of that was enormously meaningful to me. And I just got so much joy out of it, the joy you get out of becoming proficient in something to the point that it starts to become natural and almost effortless.

I used that ability every chance I got. I sang in choir; I sang for myself; I learned to play enough guitar so I could open more performance opportunities that way; I kicked ass at karaoke, and my childhood aspirations stayed alive long enough that I took my singing ability to NYU, where it made me a double threat as a drama major.

But even though I sang every day for many years, it wasn’t until I got sick in 2004 – and suddenly couldn’t – that I realized how important it was to me. When I first fell ill, I couldn’t sing because I didn’t have either the energy or the breath. Singing, I found, was one of those things that would eat up my energy very quickly. It takes a lot of breath to sing well, and if I tried, I would find myself gasping for air and the edges of my vision beginning to dim as my brain became gradually shortchanged on oxygen.

As I improved during 2005, I regained the ability to sing a bit, and for a while it was a barometer of how I was doing with the illness. I’d get a little worse and lose it, get a little better and get it back. But at some point – I think my summer 2006 crash, the one that stopped me commuting to the office – I lost it for good, at least thus far. Once I became bedridden at the end of 2007, another impediment to singing emerged – muscle wasting. If you can’t move around, all your muscles wither away, and that includes your diaphragm, the support of which is absolutely essential for singing.

Because I’m so out of practice and have no diaphragmatic support, I can wheeze out a creaky version of “Happy Birthday,” but that’s about it. I can only hit about an octave’s worth of notes in the bottom to middle of my range. Anything I might essay on the high end is just a shrieky, thin, unsupported whistle.

I said that I didn’t realize how important singing was to me until I couldn’t do it. This was for a couple reasons. The first is more prosaic and was more important when I was still working: Caffeine and I don’t get along, so my usual method of waking up in the morning was singing along to loud music while driving to work.

The other is a little tougher to explain. Singing was not just a creative outlet for me, but a way to deal with stress and emotions – and it was that aspect of it that I wasn’t fully aware of until I didn’t have it any more. I sang to psych myself up for the day, to relax myself on the way home, to deal with boredom, to celebrate when I was feeling joyful, to wallow in depressing music when I was feeling sad, to boost my confidence on difficult days, to sing harmonies to anything and everything because it made me feel like I was putting something beautiful and unique into the world, and to vent along with Elvis Costello when I was pissed off. And that, really, is only the beginning of how I used it. Pretty much anything I needed to deal with, I dealt with partially through singing as catharsis. And I can’t do any of that now.

Truthfully, I can barely even listen to music these days – it’s just one of many things that’s a major energy eater and difficult because of my cognitive dysfunction. When I do, the need to sing harmonies is still overwhelmingly there, but I can’t do it – and not being able to do it, having to just listen and not fulfill that need, is almost physically painful. There’s a profound, oppressive sense of loss. I feel cheated, feel wronged, feel like I’ve had something I earned and was entitled to cruelly stolen from me. I still love music, but because it’s painful to listen to and painful to have to not sing, I’m kept away from it except for at moments when I feel like I absolutely must hear a particular piece, and then I listen at low volume in snatches of a song or maybe two at a time. After decades of collecting music, I’ve lost track of the catalog of many artists I deeply love, because I can’t listen to an album all the way through.

Getting this back would make my life much richer, but it’s so far along the continuum of recovery that I despair of ever reaching that point. I’d need both my cardiac output and my muscle tone to substantially improve to get there. I would probably be well enough to work before I would be well enough to sing again, and getting from 98% bedridden to that point seems profoundly unlikely.

Sadly, I haven’t really found something to replace singing, and at this late date, I don’t expect I will. It was so much a part of my life for so long, and I used it in so many situations, that there just isn’t anything that’s analogous or as universally useful to me. Writing is probably closest, and perhaps the thing that I’ve been doing to deal with life second longest, but as helpful as it can be to put fingers to keyboard, it badly lacks the transcendent beauty of being able to raise my voice and thereby put my cares thoroughly aside.

22 Responses to Losing My Voice