Even though my vocation for more than a dozen years was food, I’m a relative latecomer to vegetable gardening. It wasn’t something my parents did – I remember tomatoes a couple times, I think, and an excellent accidental watermelon one summer, which took root in the sandy soil of our play area from the previous year’s watermelon seed spitting contest, and some blueberry bushes planted along the side of the house when I was in late high school that wouldn’t have started bearing until I wasn’t living there any more. I wished for apple trees and a vegetable garden in the backyard, but mostly in the same way as I wished for a swimming pool or a pony or a treehouse – none of the latter bunch of which were within the limits of our HOA.

In 1996, I made my first abortive attempt at herb gardening – in containers on the deck at my mom’s townhouse when I was living there alone, after she and my brother had moved to Indiana. Everything succumbed, because with no experience, I did everything wrong – too little water, too much sun, too-large containers. Then Chimp and I lived in a long series of so-called garden apartments, and it wasn’t until we got to Fresno that our garden apartment had any area where I could actually garden. We had a little patio and a little patch of dirt about the same size as the patio. I bought herb plants and a rotating compost bin. The plants flourished – with more than 300 days of sun per year, my basil grew three feet tall. Progress. The compost bin became host to a massive colony of soldier fly larvae. (Some people do it this way on purpose, (warning: grody bugs at that link) but it was not my speed. Too…larval.)

So it wasn’t until we landed here in our little southwest Pennsylvania burgh that I started to garden in earnest. We started in 2010 with a few pots of herbs and some extra tomato plants a friend gave us tucked in along the side of the porch, and surprised ourselves by getting a bumper crop of tomatoes. Every year since then, we’ve expanded the garden in either size or scope. In 2011, Chimp put in four 4×4 raised beds for herbs in for me, which he tended, then in 2012, two more, and we also had some longer beds tilled that season.

I started mostly with herbs here, just as I had in Fresno, because I like them used in cooking at approximately the prominence most people use vegetables, and that gets expensive fast. So that first year we had the raised beds, we filled them with basil, dill, parsley, and cilantro, with a little mint tucked in to a corner of one bed.

By 2012, I had improved enough that I started to be able to walk out into the yard a few days most weeks. I started experimenting with vegetables in earnest, and we grew peas, radishes, squash, potatoes, cucumbers, beans, hot peppers, mustard greens and chard. This year we added carrots, beets, fennel, cabbages, leeks, kale, and broccoli. We started a lot of plants from seed this time around, and I’ve even done some succession planting, though with my limited energy, not as much as I’d like.

This spring we had the slopingest bed enclosed with native stone from the retaining wall we’d had to have replaced, which brought us to this stage at the beginning of the gardening year.

So part of why I’ve gone garden-crazy is finally having the space to do so, and part of it is that we don’t live within easy reach of Whole Foods, our local supermarket is not very super, and the growers at our farmer’s market lack adventurousness in their cultural choices. So if we want something special, or a lot of something, our best option is to grow it ourselves.

As with everything else, ME/CFS is also part of the reason. By necessity, my days’ activities are much the same: I’m at home, lying down, 98% of the day and 98% of the time; I don’t go to work, or to the store, or out with a friend, or on vacation. The garden fills up a lot of the space in my life that’s been vacated by the things that fill most people’s days, and the tasks it requires of me give me a similar sort of sense of purpose and sense of accomplishment that other roles used to.

It also gives me a little bit of autonomy back, in a life where I have to be helped with an awful lot. The garden gives me something to plan for – comparing varieties, setting up schedules, laying out plots. It gives me a reason to be excited to get up in the morning – to see what has germinated, or blossomed, or ripened, or is just big enough to pick. It gives me day-to-day responsibilities – planting, transplanting, pinching back, harvesting. It gives me problems to solve – pest and disease problems, succession planting, crop rotation.

And because my stamina is so limited, it gives me what I consider an energy multiplier. I can’t do much in the greater scheme of things; I have little in the tank to expend, and just about all of my physical exertion, ten or twenty minutes a day on good days, goes into the garden. But what I get back from Mother Nature for those minutes is enormous. I consider that I put in 2%, Chimp puts in another few percent here and there on the heavy tasks I can’t manage, and with sun and rain and time, Mother Nature takes it the rest of the way to 100%.

Despite how prosaic it is, there’s still something sort of miraculous to me about the fact that you can put seeds into soil and get plants to eat. It feels even more so to me because of being chronically ill. Gardening is one of the very few areas where my physical limitations make little difference in the end result. It matters not a whit that planting those seeds takes all of my effort. Once they’re in the ground, my energy level doesn’t factor in at all – I get the same radishes, the same beans, the same basil, that anyone who turned the earth would get. It allows me to be a success in a life where I don’t feel like much of a traditional one most of the time. I can’t make money anymore, but cutting our grocery bill significantly throughout the summer, and a little bit in the winter, too, lets me feel like I’m helping rather than just sponging. 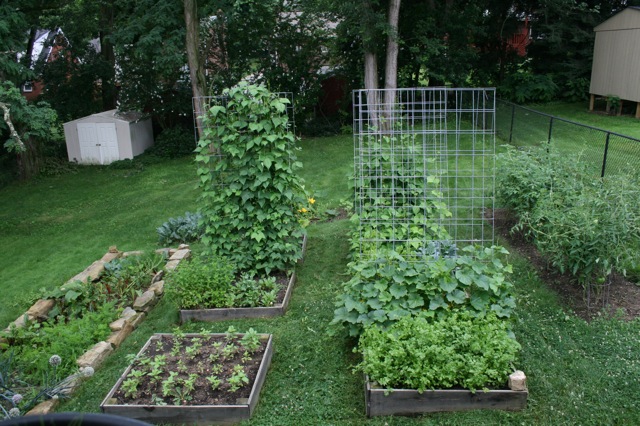 This is what it looks like in full swing.

As a person with limited energy, I do have some special gardening strategies. Because I can only stay upright for about 20 minutes total, I can’t put in a day-long blitz. I also can’t endure temperatures over about 73 degrees. So I generally do whatever gardening I’m going to do right after I eat breakfast, and that’s my physical exertion for the day. I have a small, lightweight basket that I keep right next to the door with my seed packets in it, fastened together in families (roots, brassicas, leafy greens, herbs, etc.). My gloves and wide-brimmed hat are on the same table. I have a chaise lounge right outside the door where I can sit to fill containers and start seeds, and I leave my spade and fork and shears at hand there. If I’m going out into the yard that day, I can tuck the tools into the basket and still have room to harvest into it.

I limit my activity to one or two tasks, depending on how long they will take, how far they will require me to walk, and how much standing I’ll need to do. If I’m having a good day and filling cups with soil and starting seeds, I might be able to spend 20 minutes filling two sets of 12 cups each, because it can all be done sitting down right outside the door. If I’m having the same sort of good day and harvesting beans, which requires walking out into the yard and then standing, reaching, sitting, and pulling, that will pretty well take the stuffing out of me in a few minutes and has to be the only garden task for the day. Other days I do a little bit of transplanting, clean up damaged or spent plant material, pinch back, or harvest. This short period in the morning is enough to keep after the garden if I can do it most days of the week.

I also make choices about what to grow based on the illness – some crops work with me better than others. I like those that turn around and show a large reward in a small area fast, like radishes and salad turnips, and those that yield for a long time with one planting, need little tending and suffer minimal pest problems, like herbs, beans, squash, swiss chard, and kale. With herbs, I look for varieties that are noted for being slow to bolt, so they won’t need to be re-planted halfway through the summer. With vegetables, I choose those that yield early and for an extended period, instead of all at once, and which are said to be especially tasty. I started eight feet of green beans and eight feet of Roman beans at the beginning of the summer, have had almost more than we could use for many weeks now, and I’m hoping they might keep going until frost. I grow a variety of summer squash called Zephyr that is much better-tasting than most yellow squash and very productive, and this year we’re also growing an unusually delicious zucchini called Costata Romanesco too. Spring plantings of chard and kale will also go all summer for us, and we happily use them for saag paneer in lieu of fast-bolting spinach.

When I came to live in this house with Chimp, early on he gave me the rundown of the neighbors on our street. Across the street and one house down from us is an elderly lady by the name of Marge. Looking out the picture window on the front of our house, I couldn’t help but notice that June the riot of color that was the huge flower garden along her driveway. She keeps a beautiful garden, and each year she keeps it going until the autumn, when the springtime hanging baskets give way to mums. But I have to admit that I didn’t really get it. Flower gardening seems like a lot of work for me – evanescent results, and inedible to boot. But sometime this year, it occurred to me that Marge and I have a lot in common. Admittedly she’s more mobile than I am, despite having most of a half-century on me. Though I haven’t had a chance to meet her, I expect we’re doing some of the same thing with our respective gardens – drawing personal satisfaction from a project that needs us every day in a life stage where our society has less need for us.

I ought to get Chimp to roll me down the hill to Marge’s house before frost comes.

Just for fun, here’s a slideshow of this season’s harvest photos. Anything you see in here that required serious digging (carrots, beets, potatoes) was Chimp’s or my mom’s harvesting.

21 Responses to Inch by Inch