Inspired by Change4ME Au’s Good Day/Bad Day series, I thought I would take good day/bad day shots of my own. So here is a little look at each, although as with almost everything in ME/CFS, it’s more complicated than it might seem.

A good day: This photo of me, Chimp, my mom and stepdad, was taken in December of last year, during a short visit they paid us. When my mom comes to visit, she stays at the house, but when it’s the two of them, they get a hotel, because the added noise is over my threshold of tolerance. I need to have been doing relatively well (no sleep problems) in the weeks before they arrive in order for a visit to be possible. While they’re here, they often do stuff around the house that Chimp hasn’t been able to get to, and I need energy to deal with that happening as well. 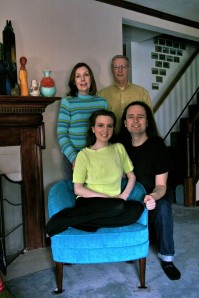 I do like to take a picture when we have visitors if at all possible, but it’s not as simple as sitting down and pressing a button.

Because I am a bit insecure about how I look without makeup (due to very thin, pale skin I have pronounced under-eye circles; I used to wear makeup everywhere including to the grocery store), I have to put some slap on before we have our photo session. Because I’m out of practice, it takes a long time, and because I have to sit up to do it, takes a chunk of energy. Furthermore, the makeup itself actually makes me tired. I have played around with using or not using several products – I had to give up my MAC foundation entirely, because it was especially problematic in that regard, but even just a little Dermablend, powder, and pencil has its fatiguing effects. For pictures, I typically brush my hair and pin it up somehow – I wouldn’t quite call it “styling” it, because any positive aesthetic appearance it has beyond a couple of barrettes is just the result of rolling it into a bun while it’s damp.

Then I have to use the cognitive energy to decide if I want to change into something like an Actual Top (I never bother with Actual Pants – too draining), the physical energy to get it and change into it, the physical energy to deal with the pressure of a garment that is closer to my skin than my usual loose-fitting t-shirt, and the cognitive energy to tell my body to try to stop noticing that I’m wearing something close-fitting.

Next is the actual photo, which involves walking out to the living room or kitchen, and sitting up – not just sitting up, but sitting up with good posture so I don’t look like a lump, which is rather taxing when you don’t use those muscles much. We do several rounds so we are more likely to get something we’ll all be happy with.

Once the photo is taken, I have to wash my makeup off and get out of my dress-up clothes. At that point I’m usually feeling that all-over burning pain that indicates I’ve overdone it and crossed over into what I call “fried.” It feels…crispy. I don’t seem to be able to manage a picture without it happening.

Thus, a photo session like this usually costs me about three days of worse function. So the picture itself is deceptive. When you see me sitting up, my hair somewhat done, with makeup on like that, it would be easy to assume that those activities are a routine part of a “good” day, when in fact they’re a special effort that comes around perhaps a few times a year.

A typical good day for me involves much less activity – walking from bed to kitchen, getting my breakfast, reading on the computer lying down, maybe getting up to fetch an afternoon snack, a trip to the nearby bathroom, typing a paragraph or two, having a bath every third day, walking back to the bedroom at night and dragging a toy in front of the cats. That’s average.

On a very good day, I might add some extremely light housework, like hanging up towels, putting away my shirts and pants that Chimp has folded, feeding the cats, or cutting up some fruit at the kitchen table. 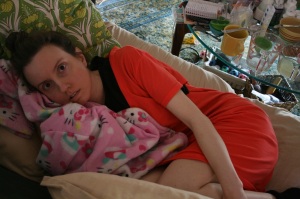 Now here’s a picture of a bad day – really beyond a bad day into a terrible day. Last summer I ate some suspect cucumbers and gave myself a lovely case of food poisoning that lasted for a couple days. I had recently seen the good day/bad day photos, so I had Chimp snap this one of me.

I wasn’t reading on the computer that day, and I certainly didn’t get up to get myself a snack. I was just trying to hold on until my system would stop flipping out.  When I look at my eyes in that picture, it doesn’t look like I’m in there at all. I certainly didn’t feel like I was. It took about two weeks to recover from that bout of food poisoning.

On a more typical bad day, like one that comes along with a particularly poor run of sleep, I might walk out to the kitchen, get breakfast, read, and walk back to bed at night, with Chimp taking over all the other tasks.

So I would say that my average good day, in reality, appears physically closer to the terrible day than it does to that good day in which I’ve made myself somewhat falsely presentable once in a blue moon.

Have you taken good day/bad day pictures? What do you think of as the difference between a good day and a bad day for you?

18 Responses to Good Days and Bad Days with ME/CFS