This is the first of a couple entries about my ongoing struggle with insomnia. Part II is here. 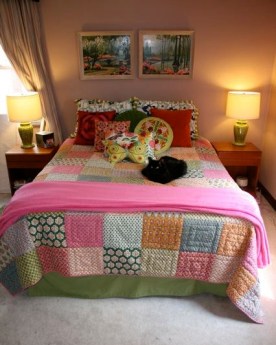 Bootsy Collins by day on the nightly battleground. (The irony of it is, my childhood bedrooms were all in primary colors.)

The insomnia is what’s going to eventually kill me.

I know you’ve probably heard someone say, “Nobody ever died of insomnia,” but I’m here to tell you that’s not true. Now, I don’t have that mutation, but I do have some serious problems with sleep. It’s nearly done me in twice already, at the end of 2007 and at the end of 2008. Every major crash I’ve had since the end of 2007 has been because of not sleeping.

Before I fell ill, I was a champion sleeper. While I never could sleep sitting up or take naps during the day, at night, I’d get in bed and be asleep in eight minutes. (I know this because Chimp, being a night owl, would come in and hang out until I fell asleep, then get up and work for another few hours.) As soon as I developed ME/CFS, I started having unrefreshing sleep, which is one of the hallmarks of the illness. I’d get in bed, sleep a whole night, and feel worse when I woke up than when I went to bed. But at least I was sleeping.

One day in November 2007, I got in bed, closed my eyes, and didn’t fall asleep, for no apparent reason. The next night, I thought for sure I’d sleep like a log, having not slept the night before, but again, I lay awake the entire night. The third night, I lay awake most of the night, but toward dawn, slept for a couple hours. And then the next three days went just like those three days. No sleep, no sleep, two hours.

I was still working at this point – from home, lying down on the couch, with my computer on my lap – but the insomnia was seriously impacting my functioning. My short-term memory was absolutely shot within a week after it started, making writing challenging and working with spreadsheets extraordinarily difficult. We started trying over-the-counter things. Melatonin: nothing. Theanine: nothing.  Benadryl/Unisom/Tylenol PM (which are the same thing): tachycardia. By Christmas, having suffered six weeks of lack of sleep, I had gone from housebound to bedridden, was unable to sit up and was in terrible pain, the worst pain of my life. I called my job and told them I needed a couple weeks off to try to recover from the crash. I had always bounced back from them before – but this time was different. Two weeks later, feeling no better, I told them I was leaving.

At Christmas, it was obvious I needed to move on to prescription medication, but I had no doctor I could call on. My previous GP had skipped town (quite literally – she disappeared, taking all her patient files with her, and when I contacted the owner of the complex where she’d had her office, he told me that if I found her, he would appreciate me putting her in contact with him, because she owed him a sizable chunk of back rent), so I had to find a new one.

My new GP tried out several drugs on me, without much success. She decided that the best thing to do at that point would be to give me Klonopin. I may have suggested it because I know I’d read that Dr. Cheney used it in ME/CFS patients to great success. What I didn’t realize then is that he doesn’t use it as monotherapy, and I was forgetting something else important as well, which I’ll get to in a moment.

I started taking Klonopin in January 2008. It worked immediately to get me to sleep, but I had trouble staying asleep, so I took more Klonopin halfway through the night. I was quickly up to about 2 mg. A friend who is a psychologist told me I shouldn’t be taking it every day, and I ignored her warning. She wasn’t living with ME/CFS, I told myself. And Cheney, who was as expert as you get, recommended it.

But by February, it wasn’t working to get me to sleep any more. We added some trazodone, which helped. So we had a successful cocktail at that point. Then, at the beginning of March, I suddenly found myself gripped with terrible anxiety, and quickly recognized what was happening. Several years before, a doctor had given me a Xanax prescription to help me manage my needle phobia, and when I took it, I found myself terrified to leave the house. Once the Xanax was out of my system, the terror went away. The Klonopin, also being a benzodiazepine, was doing the same thing. At this point, though, I’d been on the Klonopin for six weeks, and I couldn’t just stop taking it as I had the Xanax. I started reading about benzodiazepine withdrawal, and realized I was in way over my head. I just wanted to be off the stuff – but at 2 mg, you can’t just stop taking the pills.

Two milligrams of Klonopin doesn’t sound like much, I know. It doesn’t look like much – just two tiny yellow tablets. But, I learned as I read about withdrawal, it’s the equivalent of 40 mg of Valium. I started an aggressive taper, and by the end of March, was down to 1 mg. Going that fast, though, meant that the lower I went, the worse the terror got.  I was in panic mode almost continuously, every day, and the stress of that threw me into a minor crash at the end of March. Trying to stabilize, I held at 1 mg for sixteen days, and in the process, realized I was going to have to go much more slowly if I was going to survive getting off the drug.

So we started a titration taper. This is a process in which you dissolve the pills in a fixed quantity of liquid and cut a minute fraction of your dosage each day. That way your dosage goes down much more smoothly, and you don’t have the stress that accompanies larger cuts. Getting from 1 mg down to nothing took from the middle of April until the end of August. In the middle of that, I was moved by charity air ambulance from California to my mother’s house in Indiana. The stress of that and the taper took me from bedridden to almost entirely unable to function at all. I hadn’t been able to hold a book; by August I couldn’t even really use the computer. I couldn’t speak above a whisper when I could talk at all. All I could do was lie in my bed in my darkened room and wait for the days and nights to pass.

On the day Obama was elected, the trazodone failed. Once again, I had no GP, as I’d been unable to leave the house since being moved. A doctor with some familiarity with ME/CFS, who was an hour away in Indianapolis, wrote me some prescriptions, but we couldn’t seem to come up with anything that would work. We went all the way up to Xyrem, which is the legal form of GHB, and is an absolute last-ditch sort of thing. And even that didn’t work. After not sleeping a full night for six weeks, I couldn’t roll over in bed, I couldn’t feel my legs, and I was having irregular heartbeat and attacks where my heart rate would suddenly zoom up to 120 bpm without warning. At this point, because of the heart problems, I landed in the hospital right around Christmas 2008. The Xyrem was not only not working to get me to sleep, but it, in combination with the lack of sleep, was causing paranoia and delusions. I heard nurses talking in the hallway outside my room, and I thought the things they were saying were veiled messages that were actually about me.

This was the darkest period in my life. There is a very good reason that sleep deprivation is used as a means of torture. It truly is. And no matter how little I slept, I couldn’t fall asleep. I was in indescribable agony. When I could speak, I begged Chimp to help me end my life, because there was no way I could do it myself, not being able to even walk across the room. I asked my mother to move the belts out of the closet by my bed, so as not to be continually tempted.

At some point in the weeks after I got out of the hospital, I picked up the old bottle of Soma that the doctor who’d put me on Klonopin had written for me back in California. Looking for pain relief, I took some, and found that it made me drowsy. So that night I took some – and I slept. That became my new solution, and it worked great – until I ran out after a month. Nobody would prescribe me more of it, even though I’d determined that it worked really well for me. (It apparently has enormous black-market value.) So we were back to square one.

At this point, having gotten a month or so of solid sleep under my belt from the Soma, I was doing a little bit better. I felt strong enough to leave the house briefly. We got me in to see a psychiatrist in town. She suggested Seroquel, which is an antipsychotic. I was a little bit apprehensive about it, because I knew it had a bit of a bad reputation, but I had no other options. Seroquel turned out to be a game-changer, and absolutely saved my life. After another good month of sleep I was able to walk, with some difficulty, from my bed at night to a sofa in the next room during the day.

In May 2009, we took me to see Cheney, and he added some additional medications to the cocktail to make it more robust and to hopefully keep it from breaking. And it worked for a good long time. I didn’t have a crash for all of 2009. At my 2010 appointment, I asked him what we would do if the combination of drugs stopped working for me. He said that that wouldn’t happen. I knew he was wrong, just because it’d happened before, but I wasn’t going to argue with him.

Then, toward the end of 2010, the drugs stopped working, I stopped sleeping, and had a crash on Christmas Eve 2010 and another at the end of January 2011. Those cost me the hard-fought ability to walk to the bathroom. I lost it in December 2007 and got it back in March 2010. But I’m hopeful I’ll be able to fight my way back to it again soon. And the thing that got me back to sleeping after those crashes? Soma is saving my life once more. Again this time, my local GP is not allowed to write it, but Dr. Cheney will. I’m really not sure what jollies people get out of it – it just sends me right off to sleep, blessed sleep.

I hope that the course of GcMAF I’m hoping to do this summer will end this problem. If it doesn’t, like I said, I’m pretty sure that insomnia will eventually end me. Eventually we’ll just run out of drugs that will work. I try not to think about it, honestly. I’ve been down this road varying distances several times, and I never want to go down it again.

I have more to tell you next time about what Cheney told me last month when I asked him why my insomnia is so bad, the supplements that have unexpectedly helped, and maybe, if I can manage to flip through all the records, a list of everything I’ve tried for insomnia.

This entry was posted in ME/CFS and tagged Cheney, Chimp, meds, sleep. Bookmark the permalink.

25 Responses to My Weapons-Grade Insomnia