So…where were we? Ah, yes. Before the editorial expression of concern and the Chase debacle, we were talking about sleep.

Mingus (rear), Coltrane (left), and Bootsy Collins (right), way better at this than I.

For years and years now, I’ve been progressively increasing the number and amount of drugs I take for sleep. Frankly, the volume of pills I take for this is alarming – when I pile them up at the beginning of the night, it does rather look like I’m trying to do myself in. So when I say “I can’t sleep,” I don’t mean like “I need an occasional Ambien” or “It takes a bit longer than it does for most people.” I mean I cannot get a moment of rest without major pharmaceutical intervention. But I didn’t really know why this was the case until my most recent appointment with Dr. Cheney.

By the time my appointment rolled around this spring, I was at the maximum level of some of the things I was on, and some nights the whole regimen still wasn’t working. I had tried a couple new drugs and had not been able to tolerate them. This was part of why I moved my appointment to April from its usual spot in May – I seriously needed help figuring out what else might work. But let me back up a minute here.

When I was crashed for the second time in two months at the end of January this year (both times because of my sleep drugs failing), I asked Dr. Cheney what I could do to try to help myself bounce back faster. One of the things he suggested to me was that I could increase my inosine. I added some at night, instead of upping the morning dose, and found that it helped me sleep. So I shifted the first dose to the evening and the second to the early morning, at the same time I take my second round of things that help me sleep.

When I went to see Cheney in April, I asked him why inosine helped my insomnia. He explained that inosine produces uric acid, which scavenges peroxynitrite. Peroxynitrite, he told me, is produced in a cytokine storm in the brain, which, among other things, is a mechanism of sleep disturbance. Blocking that cytokine storm with inosine, then, helps me sleep.

This lead him into a further discussion of cytokine storms and what else counters them. Artesunate is an NF-kappa B inhibitor, and it sits at a choke point for a cytokine storm, so it should help with sleep as well. Low dose naltrexone, which I’m also on, can inhibit the cytokine synthesis of microglial cells, and encourages the body to produce its own opioids, both of which interfere with the cytokine storm.

So the fact that inosine and LDN, both of which I’d tried before my appointment and both of which helped me sleep, indicated to Dr. Cheney that a significant part of my insomnia was caused by a cytokine storm in the central nervous system. The cytokines in the central nervous system, he then explained, come from those previously mentioned microglial cells.

After that, Dr. Cheney explained what else he thought was behind my insomnia. He said that if we did a MRSI (magnetic resonance spectroscopy) scan of the brain, it would indicate what is called a lactate peak in the lateral ventricles of the brain, which should not be present, but commonly is in ME/CFS.

Interestingly, Dr. Cheney said a lactate peak in the brain is associated with both feelings of anxiety and sleep disturbances (I can’t currently find a cite for the latter). I asked him if this could help to explain that feeling I had in Chicago in 2004 that something terrible was about to happen. He remembered that being part of my case and said indeed, a feeling of doom would be consistent with that physiological symptom.

And if there’s a problem with mitochondria, he told us, there will inevitably be a problem with magnesium depletion. So supplementing magnesium should help with sleep, and a number of other problems as well. (And it did, as I mentioned in the previous insomnia entry.)

So: Inosine, LDN, and magnesium have all helped. I’m not sure whether the artesunate at night is helping, but it doesn’t seem to hurt. The other thing that I discovered that helps – and this happened entirely by accident – is calcium. One night when I overdid it on the betaine (the stomach acid supplement), I chewed some Tums to knock the acid down, and found it was easier to sleep. I know magnesium improves the absorption of calcium, so perhaps taking the two together (they’re often paired in mineral supplements) is having a synergistic effect. Also, over the course of the night, every time I realize I’m awake, I dose myself with several sprays of ionic magnesium, and that definitely seems to help me fall back to sleep more quickly.

At this point my sleep cocktail includes a half-dozen prescription drugs – but none of them are traditional sleeping pills. This is because Ambien and the rest of the “z-drugs” are closely related to benzodiazapines, and they do the same thing to me that the benzos do: give me screaming anxiety.

I’m at the maximum dosage of the last two, Soma and Remeron. I tolerate all of these pretty well, though I take a beta-blocker because the Seroquel tends to run my heart rate up. I take all of these with that previously mentioned betaine, because I produce little stomach acid of my own and I won’t absorb the pills without it.

And here are the things I’ve tried and abandoned for various reasons. For the purposes of this table, nervousness < anxiety < agitation. There’s a whole lot of not fun here. 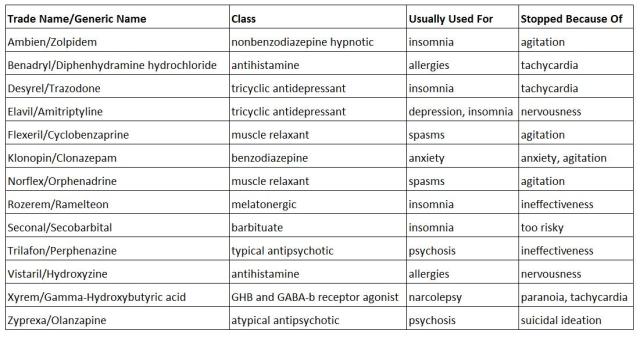 If the current wheelbarrow full of pills stops working, we have Phenergan, an anti-nausea medication, on deck to try.

I’m very grateful there are as many pharmaceuticals to try as there are, and that Dr. Cheney knows the world of supplements so well. Without any sleep drugs, I would have died in 2008. Because I have them, and Dr. Cheney’s expertise, I’m not only still here, I’ve actually improved since first seeing him in 2009. Back then, my dream was just being able to read on the computer for the whole day. Now I can even type a little most days. Sure, I’m not where I wish I could be, but I never thought I would get back even as far as I have. I’m happy to have it, for however long it lasts.

May 2013 update: I’ve added two supplements to my nightly regimen this year – P5P and Sam-e. I’m taking them in the wee hours and they’re helping me stay asleep for the second half of the night.

This entry was posted in ME/CFS and tagged Chimp, meds, sleep. Bookmark the permalink.